Rental with or without Skipper departing from Raïatea 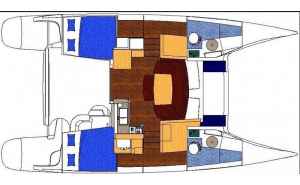 Reinforced Health Measures: this vessel complies with a special COVID-19 health protocol in place at the charter base to limit any risk of infection.

Ian at Globe Sailor did a great job finding and booking a charter with TYC. Our family had an amazing 10 days on a Saba 50 sailing around Raiatea, Taaha, Huahine, and Bora Bora. Once Ian got the charter set up there was a seamless transition to TYC who organized the specifics around the itinerary and menu. Our skipper and hostess were amazing - fun to talk to and learn more about the local culture and did a great job making our family feel special and safe. I originally hesitated on including the hostess option but would 100% take the option again. Not that many restaurants on land, and our hostess made incredible meals typically with local fresh product and presentation. If we did it again over December Holidays would take TYC advice to meet the boat in Huahine and sail West as we met the boat in Raiatea and had a pretty choppy ride upwind to Huahine (and glad we made the effort because it is a great island) before coming back to the other islands. Last thing is we were a bit worried about being in French Polynesia during the rainy season - we had daily squalls for parts of days during the first half of the trip but didn’t impact our ability to do anything, and then second half of trip very little rain. We would 100% use both Globe Sailor and TYC again to book a charter.

Firstly, very helpful staff, particularly Hina who completed boat & chart review. Also drove us into town for us to provision & made arangements for a ride back to the base. Also drove us to the airport when charter was complete. The base has very nice washrooms & showers.

Met the owner at their resort on Huahine. She was so friendly & accomodating with WIFI, use of the resorts beach, kayaks, lounge chairs. We had a delicious dinner at the resort.

Our boat, a Mahe 36 was new (2014)& very clean & well equipped. The only issue was that the chartplotter was at the nav station, not at the helm. That took a little getting used to, but in the end it worked out fine. The charter fee also included 2 kayaks or if we had preferred a kayak & a paddle board. They also ensured that we had a power inverter. It was so nice to have these items included as opposed to having to pay extra.

From start to finish we were well taken care of.

Raiatea is one of the Leeward Islands of French Polynesia located about 210 kilometers far from Tahiti. The name Raiatea means 'bright sky'. Contrary to other islands of the archipelago, Raiatea is not overcrowded by tourists. Moore your boat to a dock in the main port of Raiatea- Uturoa and see the forest-covered mountains overlooking Uturoa harbour. Raiatea is known as the island of vanilla, pinapple and coconut- get off board for a glass of pinacolada. Take a break in Utuora which offers beautiful beaches as well as parks and performances of traditional dance. Then set your sail and head for the adjacent Tahaa, sharing the same lagoon with Raiatea and enjoy the best of Polynesia.

Please complete the request form below to receive a personalized charter offer:

To send you the best offer, please give us your contact details.

If you are already a GlobeSailor client, you may sign-in using your log-in and password received by email.

The personal information collected by GlobeSailor will be used to manage your request, and it will especially allow us to better communicate with you.

We will get back to you as soon as possible